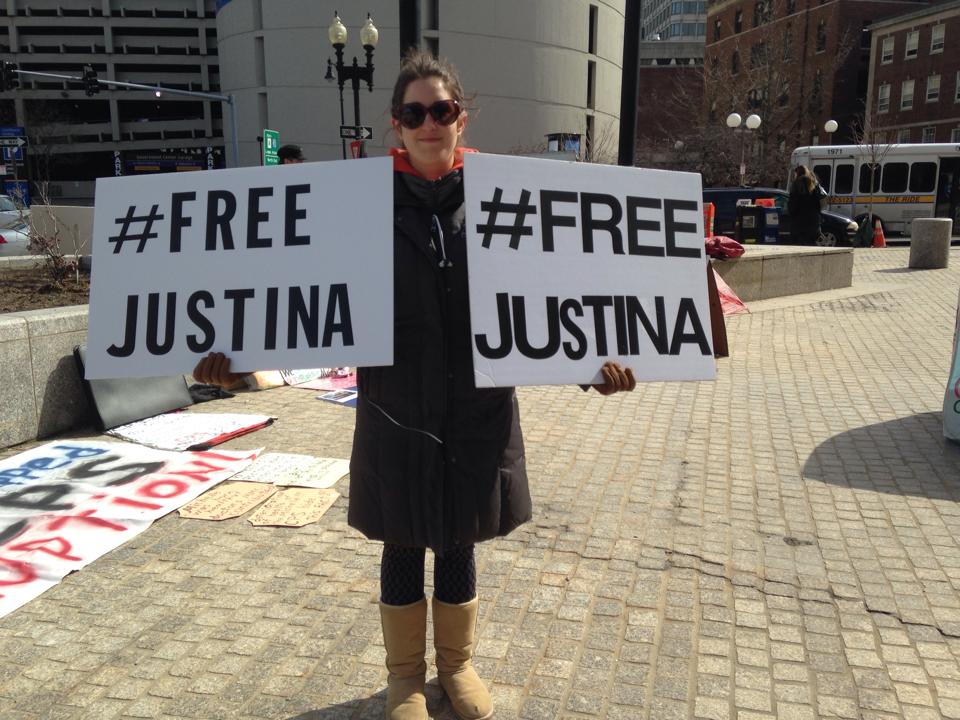 A 14-year-old girl was taken to a reputable hospital by her parents because she was sick. Next thing they know she has been incarcerated by the hospital, and because they will not agree with the diagnosis made by doctors at the hospital, they have lost custody of their daughter.

How on God’s earth is this possible in the 21st century?

I can’t fathom this scenario, but what I think is that whatever they have done has made Justina Pelletier a modern day martyr. I pray she lives to see and tell the story!

I am not an American, so it does change the landscape just a little. So at home, my first prize (since I live in the Western Cape) would have been Red Cross Children’s Hospital in Cape Town … and there are others in different cities. But if I lived in the USA (as my youngest son does right now) I’d think that Boston’s Children’s Hospital was an even better bet! But in spite of this, right now I’m thinking Cape Town is a safer city for kids in need of care than Boston will ever be! But who am I to judge?

The hospital this young, very sick girl was taken to was indeed Boston Children’s in Massachusetts. Until that moment in time she had been seeing doctors at Tufts Medical Center. Tufts is an amazing place – and it’s also in Boston. What happened after her parents had her admitted because they were desperately concerned about her health, is the subject of a movie that I have absolutely no doubt will be made. Though sadly the way it looks right now, only the box office will benefit.

HOW MUCH DO YOU CARE?

A caring family has been made to look like a bunch of crazy people who are unable to accept the decision of professionals. The fact that they were caring for their daughter – one of four – in accordance with the medical decision of Tufts, has been swept aside by a judge who has chosen to side with BCH, which in turn is aligned with Harvard Medical School. The fact that one of the daughters (Justina’s sister Jessica) has the same condition as Justina, who was diagnosed at Tufts, and which BCH doctors challenged, is bizarre in the extreme.

Who is going to be the first to write the script?

In reality, it’s a long, long story, and it’s a story I am going to continue to follow until it disappears behind the headlines once Justina Pelletier goes home where she belongs – which I really do hope happens. It is also a case, for want of a better word, that I will support every inch of the way. I don’t live in America. I don’t know the Pelletier family. But I come from a background that has exposed me to medical and psychiatric cases, and I have done a huge volume of investigative journalism. If my iota of interest can help I will have achieved something.

I believe that Justina Pelletier’s family deserves help from every human being who can summon the energy to do whatever it takes to literally set her free and take her home to her mother, father and three sisters.

Here are links to articles I have written for Guardian Liberty Voice over the past weeks. If you don’t know about the Justina Pelletier case, please read these stories. Maybe your voice can help her! I do not believe that anybody cannot be moved by her plight.

My Stories About Justina Pelletier a Modern Day Martyr

Please note that the links go from newest to oldest:

Parents of Justina Pelletier to Appeal Judge’s DCF Decision – Liberty Counsel is to follow every possible legal process to return Justina Pelletier to her parents in Connecticut so she can get medical care, access to a priest, and an education. This follows a court order late yesterday granting the Massachusetts Department of Children and Families (DCF) continued custody of the desperately ill teenager until at least June 20 this year. In a press release issued last night, the international nonprofit organization said it would be filing a habeas corpus petition or an appeal against the judge’s custody decision.

Justina Pelletier Lawyer in 11th Hour Battle With Massachusetts DCF – Liberty Counsel’s Mat Staver, the newly appointed legal representative of severely ill Connecticut teenager Justina Pelletier, has filed a contempt of court motion against the Massachusetts Department of Children and Families (DCF). This follows the refusal of the DCF to transfer care of Justina to Tufts Medical Center in Boston in spite of approval of the agreement by Judge Joseph F. Johnston on March 3. Even though the “order” was enforceable, the lawyer said, DCF has failed to make appointments with the doctors at Tufts, let alone ensure that Justina is seen by them. His 11th-hour court battle with the DCF was also prompted by the judge’s continued postponement over the past three months of a custody ruling that will decide whether the teenager can be released from the care of the DCF.

Judge Delays Justina Pelletier Ruling While Armed Guards Sit in on Visits – Massachusetts Judge Joseph Johnston delayed his promised Justina Pelletier ruling for the sixth time on Friday, stating that he will now issue the ruling on Tuesday March 25, 2014 in a facsimile message. The critically ill teenager’s family has been fighting a custody battle against the Massachusetts Department of Children and Families (DCF) for more than a year. Meanwhile her older sister Jennifer is pleading with friends and campaigners to do all they can to support Justina. Devastated by the delays in getting medication for her sister, she tweeted Friday that armed guards sit in on visits while she is with Justina and that she is increasingly worried about her condition.

Dismay as Justina Pelletier Custody Case Postponed DFC Ignores Dr Phil – There was widespread dismay as Judge Joseph Johnston failed to deliver his ruling in the Justina Pelletier custody case in Boston yesterday. He postponed the case and said he would give a ruling “by Friday.” Meanwhile the celebrated Dr. Phil announced that he had called the Massachusetts Department of Children and Families (DCF) on several occasions to discuss the case with them, but they had not returned any of his calls. While this authority ignores Dr. Phil, Justina remains at the Massachusetts Wayside Youth and Family Support Network where she has been since January. This is in spite of a DCF undertaking made nearly three weeks ago that she would be treated by a medical team at Tufts Medical Center in Boston, which is where her family wants her to be.

Dr. Phil Interviews Justina Pelletier Family on Day of Court Case (Video) – The father and sisters of Justina Pelletier, the Connecticut teenager who has been held by the Massachusetts Department of Children and Families (DCF) for more than a year, will appear on the Dr. Phil show tomorrow. The interviews coincide with a court hearing during which the Pelletier family will continue their fight to regain custody of the 15-year-old who is desperately ill and confined to a wheelchair. It is thought that Judge Joseph Johnston will make his final custody ruling tomorrow. A rally is also planned for the day of the case, as well as a TweetStorm to spread awareness of her plight tonight.

After Protests DCF Agrees to Allow Justina Pelletier to Return to Tufts – The Massachusetts Department of Children and Families (DCF) has agreed that Justina Pelletier, the desperately ill Connecticut teenager at the center of a custody battle between her parents and the state, may return to Tufts Medical Center in Boston as requested by her parents. The DCF has also announced that it agrees to allow withdrawal of its charge of contempt of court against her father, Lou Pelletier who has broken a verbal court gag order not to speak to the media on several occasions. This action came after an increase in public protests and the involvement of a new team of lawyers funded by an anonymous billionaire earlier this week.

Billionaire, Lawyers, Campaigners Rally to Free Justina Pelletier – An anonymous billionaire has stepped forward to fund a campaign to free Justina Pelletier, the young American teenager at the heart of a dramatic custody battle between her parents and Massachusetts hospital authorities. While he will be footing the bill for new lawyers set to fight for Justina to be returned to the care of her parents, campaigners are planning a weekend rally and prayer vigil outside the facility where Justina is being held.

Outrage as Justina Pelletier Placed in Foster Care (Video) – There were scenes of outrage outside a Boston courthouse on Monday after a judge ruled that critically ill Justina Pelletier be placed in foster care for the next three weeks, until her next custody court hearing on March 17. Her mother, Linda Pelletier, collapsed and was carried away on a stretcher, while her father, Lou Pelletier, yelled and cried in dismay.

Court Battle to Free American Teen With Rare Disease From State Custody – A year after their daughter was taken into state custody and admitted to a psychiatric ward against their will, the court battle to free American teen, Justina Pelletier continues. While she has still not been reunited with her family, the 15-year-old, who has suffered from a rare disease for four years, has been removed from the hospital where she was incarcerated, and taken to an alternative facility. The next custody court hearing is on Thursday.