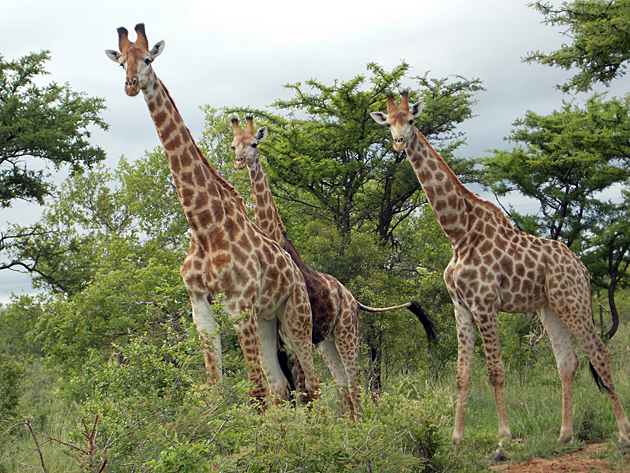 Giraffes are gorgeous creatures. Just the sight of one peering out of the undergrowth above the trees, with its melancholy eyes and extraordinary neck, is an exciting, unforgettable experience. Its coloring and intricately shaped spots are simply spectacular. And the sight of giraffes moving at a full gallop is something that is impossible to describe. 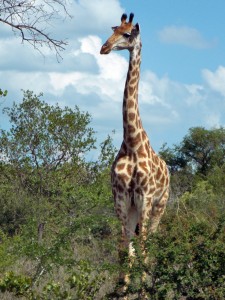 An even-toed hoofed mammal, the giraffe is found only on the African veld – or in zoos, which thankfully are becoming a less frequent occurrence.

They are sociable creatures, living in family groups that comprise as few as four, or as many as 20 individuals in each. They are also known to move in much larger herds. They roam over quite large areas, with the females keeping watch over the herd in general, and their young in particular.

The giraffe is also the tallest animal on earth, and one of the four largest land animals. Full-grown males grow up to 6 m tall, though most of this height is due to its extraordinary neck that has the same number of vertebrae as man and other mammals (seven). The difference is that the giraffe’s vertebrae are hugely elongated.

Both the eyes and lips of giraffes are endearing. The eyes have long, usually black lashes, that shade huge brown eyes. Their lips are long, prehensile and surprisingly hairy. These features protect them against the sharp thorns of the acacia tree, which produces one of the giraffe’s favorite vegetarian foods.

There are not front teeth in this amazing animals upper jaw. The upper lip extends beyond the lower lip, and the giraffes’s amazing tongue – which can grow longer than 450 mm (or 18 inches) – is designed to pluck leaves and young twigs, by drawing them along its bottom teeth. 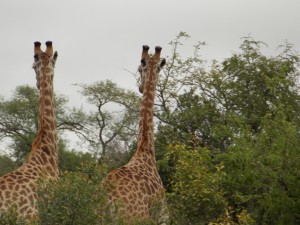 The characteristic horns on the head of giraffes are short, bony and covered with very hairy skin.

In some giraffe species there is a third horn in the center of its forehead. Others have an additional pair of horns next to the main ones.

The incredible height of the giraffe requires very high blood pressure to move blood to its lofty head. Then, when it lowers its head to drink, its head moves way below the height of its heart. This has fascinated scientists for decades, and a lots of research has been done on the subject. Essentially the blood supply is controlled by a simple valve that prevent the brain from hemorrhaging when the animal lowers or raises its head suddenly. 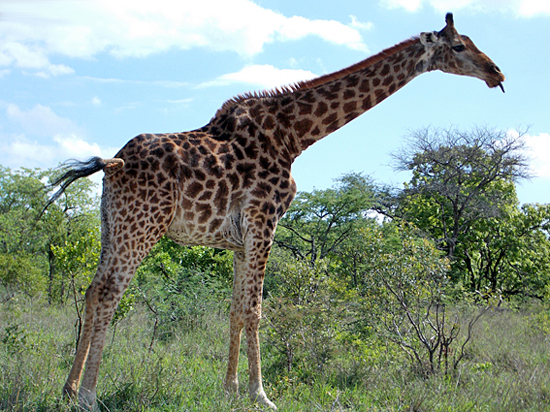 Note: All pictures were taken at  Tangala Private Camp in the south of Thornybush Game Reserve in Limpopo Province by Penny Swift.