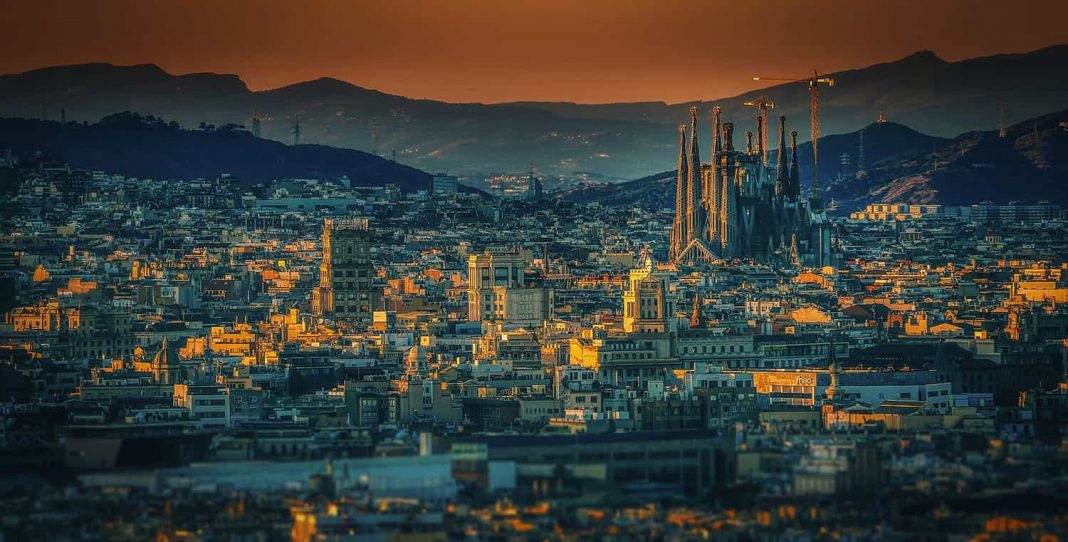 The Food Was Great But the Menu Was Shocking

It was in Spain, a long time ago! I’d been travelling with good friend and colleague Anne Stevens (now an established foodie in South Africa).

We were on the proverbial shoestring and there was no other way but to stick to it (the shoestring that is).

To put our adventure into perspective, I started out with R1,000 (roughly translated in today’s financial world as about $11,000); and that had to last me three months at least. Board, lodging, food, entertainment … including hire of “the famous green bicycle” on the Spanish Island of Formentera. Anne had a little more in her pocket than me, but not much.

I had a copy of the then travellers bible, Europe on $10 a Day in my suitcase – which I quickly realized should have been a backpack a quarter of its size. And while in Spain we managed to on under $10 a day – sometimes as little as R10.

What a blissful life this is. It’s hard to imagine ever settling down to a normal SA working life again!

We’d flown to Luxenbourg via Johannesburg on July 20, 1974, with the little money we had saved working on South African newspapers (me on The Natal Mercury and Anne on the Daily News) plus a three-month Eurail Pass each. We had also booked in for one night at a very basic hotel in Luxenbourg. (The so-called bathroom that didn’t have a toilet is a story for another day.)

It was a wonderful adventure that took us all over Europe – even inadvertently into East Germany which, at the time was completely off-limits for the average South African – and neither of us had a visa!

It hadn’t occurred to us that by travelling to Berlin we would have to cross into what was tantamount to “enemy” country.

Our well thought-out modus operandi was to travel at night and sleep on trains. It was genius stakes. But there were disadvantages, particularly when our train caught on fire. While that wasn’t a common occurrence, it did happen once … and I mention it here because there were happy Spaniards on the train. And I did a story for the record (and got paid for it). 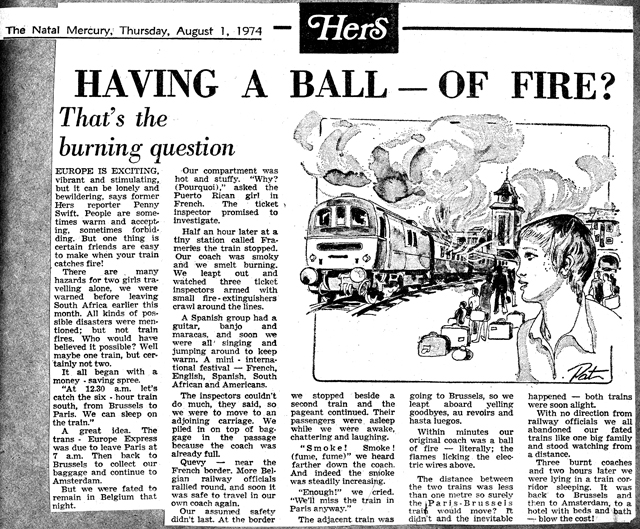 This wasn’t a working holiday, but I did do a bit of writing for The Natal Mercury while I was away. I also sent some tidbits to John Vigor, who was then quite famous locally as The Idler.

Having arrived in Spain at the beginning of August, having dumped most of our luggage in Amsterdam with a colleague of my mothers, we made our way from Madrid to Toledo and then to Almeria, an enchanting town where we decided it was time for a traditional tortilla.

We went to one of the few major hotels for lunch because it was the only place we could find that served tortilla. 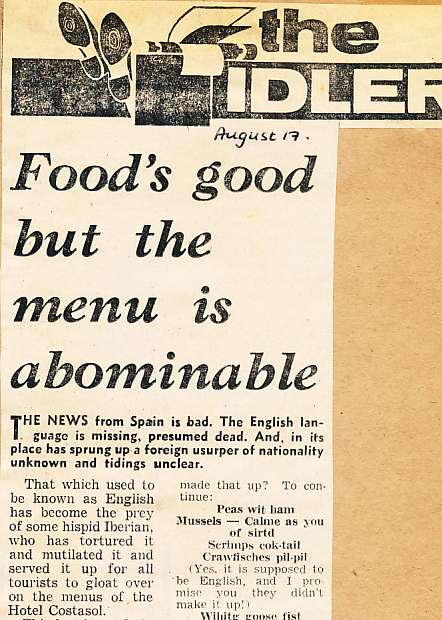 One look at the menu and I knew we had to send it to John Vigor.

Food’s good but the menu is abominable

THE NEWS from Spain is bad. The English language is missing, presumed dead. And, in its place has sprung up a foreign usurper of nationality unknown and tidings unclear.

That which used to be known as English has become the prey of some hispid Iberian, who has tortured it and mutilated it and served it up for all tourists to gloat over on the menus of the Hotel Costasol.

This hotel stands in the town of Almeria on the southern side of the Hispaniolate monarchy, and enjoys a certain reputation for comfort, size and service. As hostelries go in Almeria, the Costasol may be classed as major.

It is possibly the understatement of the week, therefore, to say that mesdemoiselles Penny Swift and Anne Stevens were, ah, surprised when they were shown the menu in this otherwise very worthy establishment.

They are former colleagues of mine who are touring the Continent and soaking up the Sol on the Costa del.

For their lunch they selected a tortilla – “Sparniard omelet” – but for much of their lunch-hour they were giggling and scribbling items from the menu into their notebooks.

LIke well-trained journalists, they dispatched their reports as soon as they could control their shakes enough to stick a stamp on the envelope. [No iPads in those days folks]

Their amusement started off with wry grins at a quaint mistake – an appetiser listed as “Tomatoes juice.” The guffaws followed shortly after with:

You think they’re making it up? Uh-uh. Under the Macaroni section that menu said:

Now who could have made that up? To continue:

(Yes it is supposed to be English, and I promise you they didn’t make it up!)

In the section marked “Hors d’oevres” diners were invited to sample these three exotic creations:

You would imagine that, sooner or later, they would get something right, even if only by accident. And you’d be quite right, as it happens. Well, almost. It comes right at the end of the menu, however, and before you reach it you have to plough through:

And then the great moment:

(One can only presume they’d run out of the unnatural kind.)

All in all, a wonderful exercise in English that isn’t English. Could it be Spinglish do you think?