Home Food and Drink Homegrown Spinach and Feta in a Wok 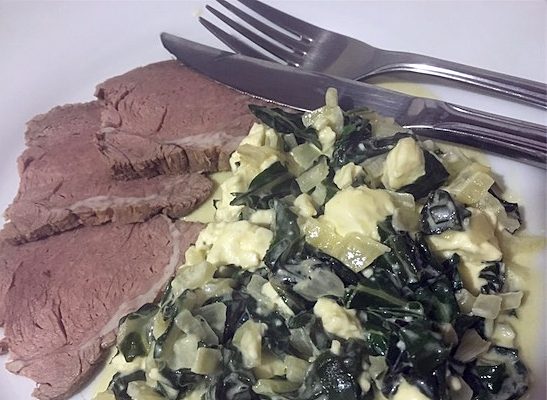 There’s nothing better than growing, harvesting and then eating your own vegetables. I’ve been doing it with reasonable success for many years. The challenge is ensuring you plant what will thrive in your garden environment – and even within a fairly close radius, this can change.

Because the soil in my current garden is really just sand, the veggie patch has been established on a concrete slab that covers a septic tank. I’ve used old wooden pallets as planters, and filled them with fabulously rich potting soil – and spinach is one of the things that just never stops growing. Originally planted in October 2015, the spinach harvested for this yummy dish is Fordhook Giant – and a giant it is! It didn’t do particularly well through the summer, but has resisted pests without any help from me, and in the past month has grown exponentially. The last time I made the dish I harvested Spinach Bright Lights, which was equally successfully – and it’s ready for harvesting again. 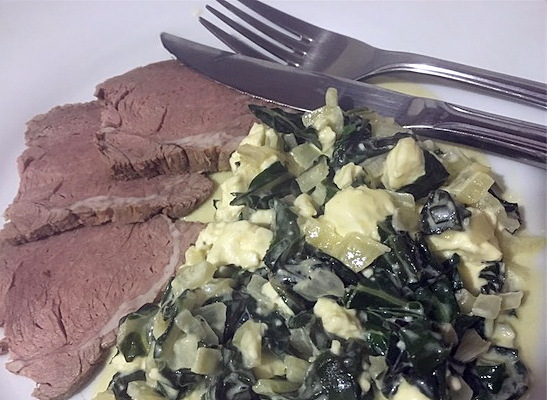 I decided to make the spinach and feta dish to go with leftover fillet steak cooked according to an adapted version of Tournedos Poche a L’Anglaise, Creme de Raiffort that is one of the highlights of Constantia Uitsig: The Cookbook published by Struik in 2000.

Ingredients for Spinach and Feta

I harvested leaves from this one head of spinach, but left the heart to continue growing. You could use a bag of Swiss chard for the spinach and feta instead. But smaller English spinach won’t work well because the leaves take only a couple of minutes to cook.

About 200 g feta (I used feta with mixed herbs, but feta with black pepper is also delish)

About 250 ml thick cream – if you leave it in the fridge for about a week it will start to thicken, otherwise you can whip if until it starts to thicken

This is one of those spinach and feta recipes where my Sola wok is first choice. The only other items needed are a sharp knife for chopping and cutting, and a slotted spoon.

Start by peeling the onions and garlic and then chopping them coarsely.

Rinse the spinach and remove the stalks together with the ribs that extend into the leaves. They are very nutritious and add substance to the dish. Many people discard this part of the vegetable, because they find it tough and stringy. Perhaps it varies between different types of spinach, but these were neither tough nor stringy. Chop.

I find that the onion, garlic and spinach ribs cook at about the same rate, but usually add the onion first, then the garlic and last of all the chopped ribs.

You can cook these in coconut oil, olive oil or butter; this time I used a combination of coconut oil and butter.

Heat the coconut oil and butter in the wok until they have liquified. Then add the onions – garlic – and spinach ribs. Stir gently every now and then to prevent the veggies from burning.

If you would prefer to use English spinach, you won’t have stalks and ribs to add to the onion and garlic.

Also they will tend to overcook when you add the cream. In this case, just blanch the spinach leaves and add them right at the end with the last batch of feta.

When the onion mix has softened and looks translucent, add the chopped spinach.

Add salt and pepper to taste.

Allow the spinach to cook for about 15 minutes, stirring occasionally.

Add the cream and stir to mix. Make sure the heat is on low; allow to simmer very slightly to thicken.

Now add the feta cheese, bit by bit. Stir and allow some of it to melt into the sauce. You also want to have some chunks left, which is why it’s important to add the cheese progressively.