Bullfights remain popular, though controversial, throughout Peru. They are generally held in a safely fenced off arena or proper stadium like the one pictured above.

An amateur bullfight in Peru has left at least ten people injured after amateur matadors, some of whom were drunk, attempted to prove their bravery by fighting the angry bull. The incident, which was captured on video and posted on YouTube, took place on Sunday in a village in the Ayacucho region of Hyamanga Province at the end of the annual Senor Espiritu Santo (Lord Holy Spirit) Festival.
Read more…

And just for fun, the translation courtesy Google Translate of an original version of the story that features drunk amateur matadors: 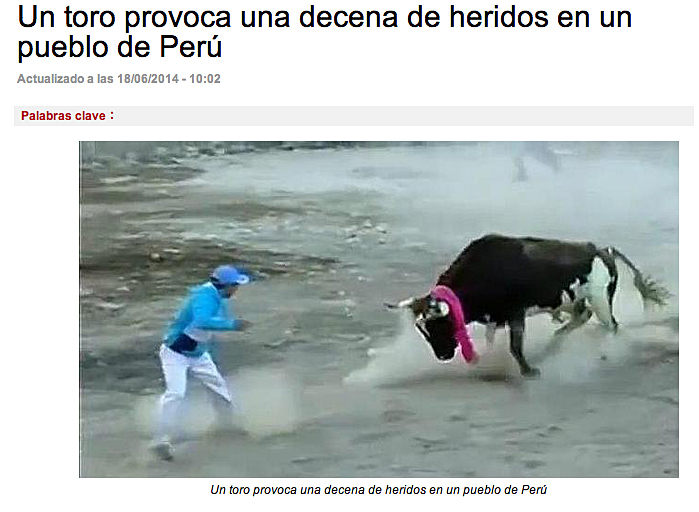 “A celebration of the bull rope in a village in Peru nearly ended in tragedy. One attendee, an irresponsible act, untied the rope that protected the public and let the morlaco released. Since then the beast roamed freely through the makeshift arena leaving behind a trail of romps.

“Despite the amount of caught, only ten wounded. Many of them suffered from loose animal, and the public jumped into the ring to help fallen and drag the first security zone. The vast majority, however, escaped without major problems.

“This bullfight marks the end of each year the Lord Holy Spirit festival in the department of Ayacucho in Peru, where locals come in a makeshift arena to show courage against an angry bull.”