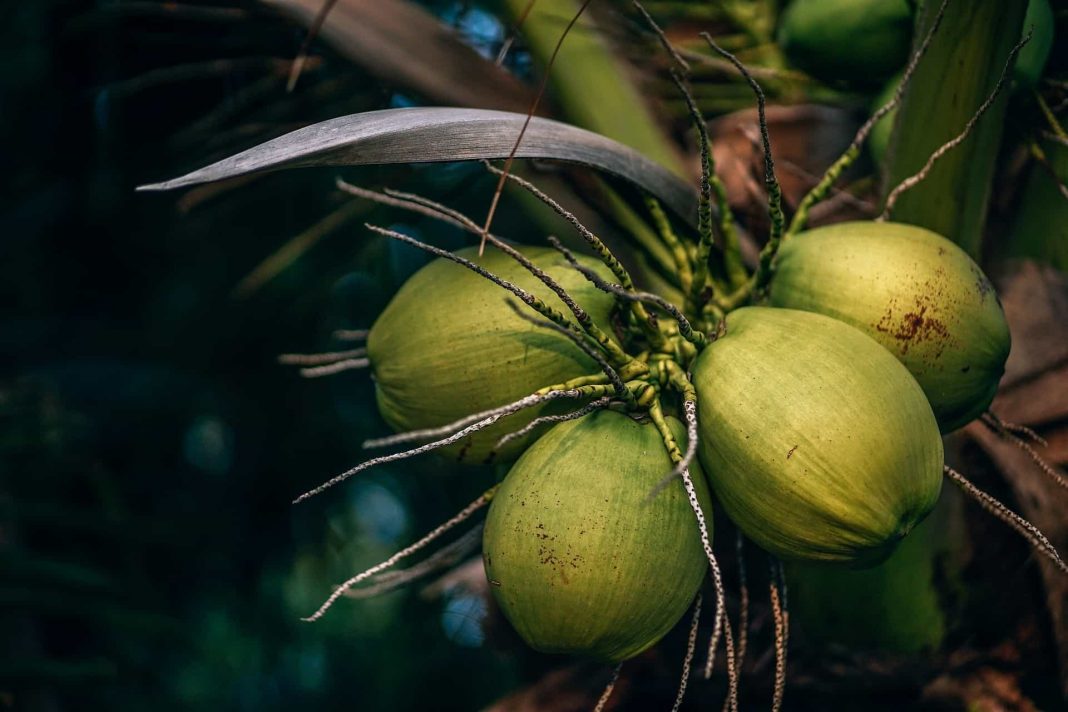 Coconut milk, a popular ingredient in Thai food, has gained popularity recently largely because it is a high fat, low carbohydrate food – in keeping with several diet programmes that are currently hugely popular. But canned coconut milk – and coconut cream – often contains sugar, and almost always stabilisers and preservatives.

The good news is that it is relatively easy to make your own coconut milk and coconut cream using fresh coconuts which are now sold in most supermarkets and fresh fruit and veg stores.

The Coconut is Not a Nut

Found throughout the tropics and in subtropical areas, coconuts grow on the Cocos nucifera palm tree.

Like mangoes, olives, pistachios, cherries, nectarines, peaches, plums and apricots, coconuts are not nuts, but drupes – a fleshy fruit with a stone or pit, sometimes called stone fruit. But while the seeds of other drupes are commonly distributed by the animals that eat the fruit and swallow the pit (or seeds), the coconut is generally too large and fibrous for them to do so, and its centre is, in any case, hollow.

When cut in half, you will see solid white-coloured “meat” inside the coconut, and liquid “water” that people often mistakenly construe to be coconut milk. Instead, both coconut milk and cream are made from the flesh (or meat) of the fruit. It can also be made from commercially prepared desiccated coconut, though this also has some sort of preservative added to it, sulphur dioxide for instance.

There are various related ways to make your own coconut milk, some people choosing to add cow’s milk (or cream if they are making coconut cream). But the international food standard from Codex Alimentarius – set up by the World Health Organization (WHO) and the Food and Agriculture Organization of the United Nations – does not advocate the addition of dairy products. Of course there’s nothing to stop you from using dairy products to make your own coconut milk and cream, but it does seem unnecessary.

The Codex Standard (CODEX STAN 240-2003) applies to all packaged (in other words commercial) coconut milk and coconut cream products that are prepared by using:

The coconut and water is then processed using heat before it is “hermetically sealed in a container” ready for distribution.

The standard also specifies the different types (or styles) of coconut cream and milk.

This is made either from the lower part of the “centrifuged” coconut milk (that has been separated by centrifugal force) or by diluting coconut milk with coconut water or water. Must contain at least 5 percent fat.

This is described as “the dilute emulsion of comminuted coconut endosperm (kernel) in water.” Must contain at least 10 percent fat.

This is the emulsion that is taken from the “matured endosperm” or kernel of the fruit to which water or coconut water may or may be added. Must contain at least 20 percent fat.

A concentrated product that is manufactured by partially removing the water from the coconut cream (above). Must contain at least 29 percent fat.

The Codex Standard also details what food additives may be used for commercially produced coconut milk and coconut cream, including:

How to Make Coconut Milk and Cream

As we all become increasingly aware of the effects that many food additives have, the trend is turning back towards homemade and healthy food without preservatives and things like “bleaching agents.” While only one type of preservative may be used in terms of the Standard, sodium benzoate, this is an additive that many people are highly allergic to.

So if you have the time and energy, why not make your own coconut milk? It is time consuming and quite hard work, but it is highly rewarding.

First you will need to dehusk the coconut; at this stage the legendary face-like markings at its base will become evident. Then peel the coconut and rinse it thoroughly. Slice in half and drain the coconut water into a bowl.

Now cut the fleshy fruit (meat) into chunks and place in the jug of a good quality electric blender. Add a litre of warm water (including the coconut water). The coconut will become thick and milky.

Drain the liquidized coconut through cheesecloth into a bowl or some other container. Squeeze the last part using your hands. Your homemade coconut milk will last in a sealed container in the refrigerator for up to a week. If the fat begins to separate from the milk, stir or shake.

You can use coconut milk for cooking or as an ingredient in smoothies and other drinks. Enjoy.